ROM of the Month

This is a collection of tools for SM64 ROM hacking.

The SM64 Editor is a discontinued tool that contains the power to extend the SM64 ROM, import levels, import models,
import music sequences, and making many tweaks to the ROM. A good tool to start hacking SM64 with. 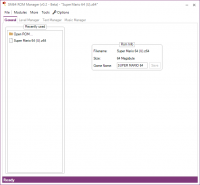 The SM64 ROM Manager is a tool similar to the SM64 Editor. It combines multiple of Pilz's previous tools into one and supports many model formats such as Collada, 3DS, FBX, IFX. It is still in the beta stages.

Toads Tool 64 is used for adding and manipulating objects and editing some built-in textures.

Quad64 is an open source level editor similar to Toads Tool 64. Edits made to the ROM are console compatible and it even supports the European and Japanese ROMs. It is still in beta.

SM64Paint is a vertex painter, texture editor, and somewhat of a display list editor for SM64 and is currently in an early beta stage. 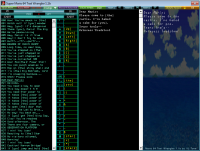 M64 Text Wrangler allows editing of most of the text found in Super Mario 64, including dialogs, level names, and act (star) names. It requires an extended Mario 64 ROM. 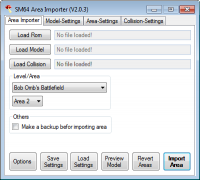 The SM64 Tweaker contains an easy to use GUI for tweaking many settings within SM64. This includes, but not limited to: item boxes, boss settings, HUD configuration, coins, More Objects Patch, cap settings. This tool is actually WIP. 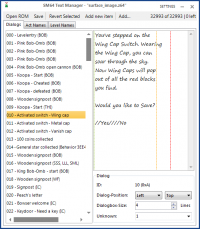 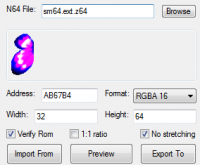 N64Rip is a frontend for Joe's N64 Raw Graphics Tool. It allows you to rip and insert textures into a decompressed (extended) ROM. 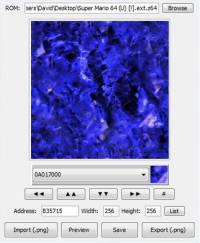 The Skybox Importer allows you to easily view and change the level skyboxes.

Simple Armips GUI is a GUI frontend for armips - a multi-arch assembler that supports both the N64's CPU and RSP. Armips has powerful expression parsing and macro support and it can use custom text encoding tables for strings. It even has an ELF linker for importing code compiled from languages like C and C++.

A simple graphical user interface for queueRAM's sm64extend program. sm64extend GUI will expand your ROM to the size you want and uncompress all of the MIO0 data.

N64 ROM Disassembler is a GUI disassembler and assembler. You can use it to make quick asm changes in N64 ROMs. Supports address translation, notes, function navigation and more.