ROM of the Month

This page lists the problems found over the past few years to help figure out how to get custom SM64 ROM hacks to work on real N64 hardware. Each issue that we have discovered is detailed here, and also includes ways to fix those issues.

The problem with N64 emulators

As we all know, Nintendo 64 emulation has never been perfect in the 20+ years since the console's release. This is mainly due to the architecture that was created by Silicon Graphics back in the mid 1990's. The console truly was a unique piece of hardware. While most N64 emulators do a good enough job for casual players who want to only play games, there are some inaccuracies that can create problems for ROM hackers.

In SM64, the game will load up scripts & models using level script commands for each level. Level script command 0x17 is used from copying uncompressed data from the ROM into RAM, and the commands 0x18 & 0x1A are used to read compressed MIO0 data from the ROM and then decompress the data into RAM. The MIO0 compression was necessary to make SM64 fit within an 8MB cartridge. Since ROM hackers don't really need to worry about file sizes (up to 64MB), we use ROM extenders to decompress the data into another place in the ROM file and convert all of the 0x18 level commands into 0x17 commands.

The problem with early extender tools, like VL-Tone's original SM64 ROM extender, is that the addresses where the decompressed data was stored was in a bad alignment. The N64 requires a 2-byte alignment for ROM addresses, and an 8-byte alignment for RAM addresses when copying data. This means that if the start/end ROM addresses within the 0x17/0x18/0x1A commands were odd, then copying data from ROM to RAM would fail. This creates the white screen freeze after a file is selected.

For example, here are some load commands from the first hub area in SM64 The Green Stars:

To fix this issue, we will have to look through the entire ROM file and adjust every 0x17/0x18/0x1A level script commands that have odd ROM address values. Thankfully, some people have made tools to do this automatically like queueRAM's sm64compress tool.

If you want to make your own tool that will implement this fix, then you can follow these steps:

In the display lists that draw the level's triangles, you might see a 0xFC command near the top. This is the command that will configure the RDP's color combiner. Like it's name suggests, the color combiner will take in inputs from many different sources and combine them into a single color that affects how the polygons in a model will look. Basically, using a wrong combine value will cause the level to not look the way you want.

The problem with earlier versions of the SM64 Editor is that it only used a single 0xFC command for all of the display lists:  FC 12 7F FF FF FF F8 38 . This one command was only meant to work with solid RGBA textures in levels that have fog. For levels without fog, all of all the geometry will just flash between different solid colors. (see gif above)

To fix this issue, we need to go through all the Fast3D display lists of every single level and determine if the 0xFC is fine to use or not. If the wrong 0xFC command is being used, then we need to replace it with a correct one. There are 4 0xFC commands that we need to know:

We don't need to worry about other texture formats, since every single version of the SM64 Editor has only ever used RGBA16 textures.

To figure out if a level has fog or not, you will have to look at any 0xB7 (F3D_SETGEOMETRYMODE) commands that you see before a 0xFC command occurs. If the parameters contain a 0x10000 flag, then fog will be enabled in the level.

Some versions of the SM64 Editor, like v1.9.3S, will have warping polygons when the player is moving around the level. This issue was caused by setting the camera frustum's far value to be a negative number (0x9696 = -26,986) in the Geometry Layout Command 0xA (Set Camera Frustum).

This issue can be fixed by changing the camera's far value back to being a positive number. The largest possible positive number is 0x7FFF (‭32767‬). A simple way to fix this problem is to look through all the bytes in the ROM file and find a specific pattern of bytes:

Issue with Fog and Billboarded Objects

Levels imported in SM64 Editor using fog with transparent textures, have an issue where sprite-based objects like coins, chuckyas, and goombas would be covered with the fog color. This is an example on a “SM64: Ztar Attack” affected level: 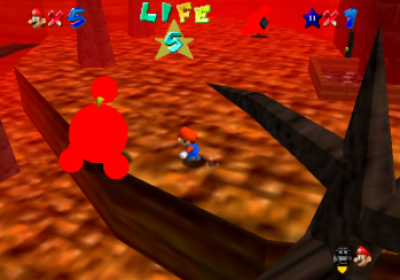 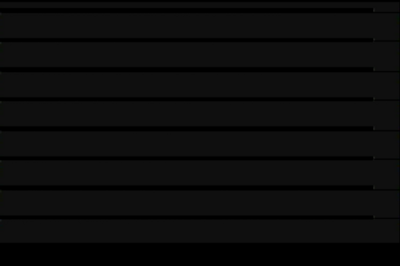 The RCVI hack is an option in the SM64 editor, under the “ROM Settings” tab, that can potentially reduce lag in emulators. The hack simply changes two bytes at ROM offset 0xF00C2 from  02 0D  to  08 34 . However, this hack prevents the game from working properly on console. It produces the strange visual artifacts seen in the image above on boot.

To fix this issue, you only need to revert the two bytes back to normal. Just change the two bytes at ROM offset 0xF00C2 to  02 0D . Once that is done, make sure to use a program like n64crc.exe to recalculate the ROM's checksum.

Older versions of the SM64 Editor moved the sound allocation to address 0x803D0000. The problem with using that address is that the region from 0x8038F800 to 0x803FFFFF is constantly being overwritten with the game's framebuffer, so any data that gets stored within that region will be erased immediately. Some graphic plugins for Project64, like jabo's, have the option of writing the framebuffer to memory turned off by default, which is probably why this was not caught earlier.

To fix the music allocation issue, you just need to do the following:

Later versions of the SM64 Editor will put the music memory pool in extended memory, which is safe to use. Please do not store data within 0x8038F800-0x803FFFFF if you want your hack to be compatible.